The Indian wicket-keeper batsman, Rishabh Pant may have been criticized when it comes to his keeping. However, his batting numbers in Test cricket can’t be denied as well. After his knock on day 3 of the Sydney Test against Australia, Rishabh Pant has now surpassed the record of Sir Viv Richards in terms of consistency and batting in Australia. Rishabh shared a crucial stand with Cheteshwar Pujara after the dismissals of Ajinkya Rahane and Hanuma Vihari.

In the course of his knock, Rishabh Pant managed to register his ninth consecutive score of 25+ in Australia and broke the earlier record of eight consecutive knocks set by England legend Wally Hammond, West Indies superstar Sir Viv Richards and India’s Rusi Surti. The Indian youngster’s knock of 159 came at the Sydney Cricket Ground in 2019 is the highest score by an Indian keeper in an overseas Test.

ALSO READ: Warne And Symonds Face Heat For Taking A Dig At Labuschagne

Rishabh Pant also shared a crucial partnership with Ajinkya Rahane in Melbourne which helped the visitors to increase some momentum and they eventually managed to win the Boxing Day Test for the second straight time.

The Indian youngster already has a plethora of records under his belt and he played a crucial role in India winning the 2018/19 series in Australia. His glovework, batting, and sledging were memorable as India dominated during that tour. However, lately, his keeping and batting fell away and he lost his place to Wriddhiman Saha in the Test matches. After Wriddhiman Saha failing to score runs in Adelaide, Rishabh Pant has repaid the faith slightly but there is still a lot of room for improvement for him in terms of his glovework.

ALSO READ: Rishabh Pant Taken To Hospital For Scans Of His Elbow

Ricky Ponting, who was the head coach of the Delhi Capitals side that features Rishabh, said that he was disappointed the latter’s keeping but added that Rishabh was lucky that Will Pucovski could not capitalise on the opportunities. The Indian youngster will be hoping that he can repeat his heroics of 2019 and put India on top in the third Test against Australia. 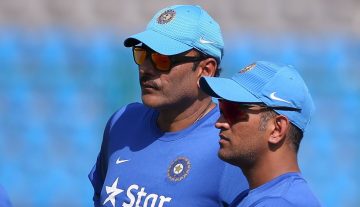