The Indian wicketkeeper-batsman, Rishabh Pant has been making the headlines for quite a few days now. Tim Paine, the Australian captain, called him a babysitter when he came to bat in the first innings at the MCG. Pant then referred to him as the ‘temporary captain’. Paine’s wife Bonnie also didn’t miss out on the opportunity of adding humor to the incident and posted a picture on Instagram with pant carrying the babies.

In the picture, Pant was seen carrying their children. She captioned the photo and wrote, ‘best babysitter’. The photograph was clicked during a party at the Australian Prime Minister’s Residence. Thereafter, both Paine and Pant took it on a lighter note and praised each other. Both cricketers are currently playing the fourth and final Test at the renowned Sydney Cricket Ground (SCG).

In the meantime, Rishabh was involved in another ‘babysitter’ alike incident during Australia’s first innings in the ongoing encounter. The incident took place in the second ball of the 37th over when chinaman Kuldeep Yadav bowled to Marnus Labuschagne, Australia’s new number three Australian batsman. Kuldeep gave the ball air and churned out a full-length ball wide outside the off-stump.

However, the batsman went for a full-blooded sweep and made a good enough connection. But the ball went and hit Hanuma Vihari, who was standing at short-leg. The ball came from the middle of the bat and hit the youngster, who fell on the ground. A lot of Indian fielders went and inquired the injured fielder. Pant also ran up to him in order to inquire about his well-being.

Pant went and cuddled Vihari and pulled out the ‘babysitter’ action. The wicketkeeper also has had a good match with the bat in hand as he scored his second Test century in the first innings and helped India to a massive first innings score of 622 for the loss of seven wickets after which the visiting team declared. 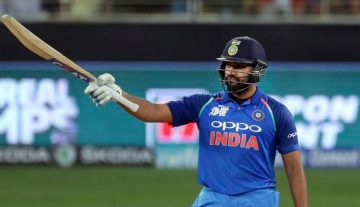