The ongoing Border Gavaskar Trophy between Australia and India had has been witnessing some banters between the two sides. From Tim Paine and Virat Kohli to Tim Paine and Rohit Sharma, the focus has now shifted to another friendly conversation captured between Nathan Lyon and Rishabh Pant.

Pant has been trying to get into the ears of the Australian batsmen since the first Test, having a go at the Australian batsmen by trying to divert their attention. The young gloveman had a conversation with the off-spinner which was caught on the stump mic wherein Pant was provoking Lyon to give his wicket so that he doesn’t have to come on day 5.

The GOAT also replied to him in a friendly manner, continuing the conversation. Rishabh was quoted as saying “Come on Gary. You don’t want to come tomorrow for nothing.” To which the 31-year old chuckled and said, “I can’t even understand what you’re saying, mate. I like you too Rishabh.”

Here’s the video of the same:

Having set a mammoth target of 399, the hosts again failed to prove their worth as none of the batsmen making a substantial score. However, a resilient Pat Cummins forced India to take the encounter to day 5 where India need two wickets and Australia require 141 more runs to win.

For Day 5, there is also a rain forecast but India will be hoping for some time of play to clean the tail lenders to secure a formidable 2-1 series lead with one to play. Earlier India elected to bat and declared the innings at 443/7 of seven wickets. Cheteshwar Pujara top scored for India with 106 to his name. Australia crashed to 151 in their first innings, having conceded a lead of 292.

Pat Cummins lad a late and an inspired fightback of the hosts with his fiery spell of bowling but India kept piling on the runs slowly and steadily. 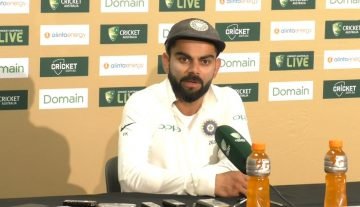 News
By CricShots - Dec 10, 2018
Virat Kohli Explains The Why Ishant Sharma Is Pissed After The Win