The build-up for India’s much-anticipated rescheduled 5th Test against England is heating up as Rohit Sharma and his men will be locking horns with Leicestershire in a 4-day practice match from June 23 at the Leicestershire County Ground. India’s Test stars have been training in Leicestershire as they regrouped for the first time since the Test series against Sri Lanka at home.

The 4-day practice match will be key to India’s preparation as the star players haven’t had any competitive red-ball action in a long while England will be heading into the contest on the back of three-match Test series against world champions New Zealand. As it turns out, Leicestershire confirmed on Wednesday, June 23 that 4 players from the Indian squad, including Rishabh Pant, Cheteshwar Pujara, Jasprit Bumrah, and Prasidh Krishna, will be playing against India in the 4-day practice match.

The 4 Indian cricketers will be playing for the Leicestershire county side which will be led by Sam Evans.

ALSO READ: Jos Buttler Smashes A Six Despite Ball Landing Off The Pitch

In a statement regarding the same, Leicestershire said, “LCCC, BCCI, and the ECB have all agreed to allow the four players from the visiting camp to be part of the Running Foxes side, in order to allow all members of the traveling party to participate in the fixture (subject to fitness). The match will be played with 13 players per side to provide further flexibility and help manage bowling workloads.”

Rohit Sharma will lead India in the warm-up match as he gears up for his first overseas Test as the skipper of the senior national team. India will be missing the services of KL Rahul, who is out with a groin injury that ruled him out of the recently-concluded T20I series against South Africa at home.

Leicestershire also confirmed that R Ashwin hadn’t arrived in the UK until Wednesday and that the off-spinner will not be part of the warm-up game. Ashwin missed his flight to England after testing Covid-19 positive even as the rest of his teammates left Mumbai on June 16. Head coach Rahul Dravid, Rishabh Pant, and Shreyas Iyer arrived in England on Monday after completing the T20I series against the Proteas at home. 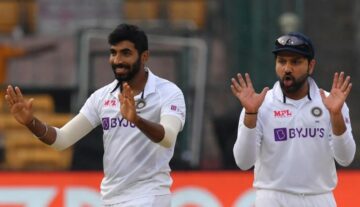 News
By CricShots - Jan 25, 2023
Rohit Sharma Is Hopeful Of Coming back For The Last Couple Of Tests Of BGT