Young Indian cricketer Riyan Parag gave the testimony of his brilliant fielding abilities during the Rajasthan Royals’ (RR) second match of the Indian Premier League (IPL) 2020 against Kings XI Punjab (KXIP) on Sunday (September 27). In an electrifying clash at the Sharjah Cricket Stadium in Sharjah, Parag showcased his fielding skills as he saved crucial runs for his side.

After winning the toss, RR skipper Steven Smith welcomed KXIP to bat first as the Punjab side got off to a flying start. The runs kept flowing like water with openers KL Rahul and Mayank Agarwal hitting the RR bowlers all over the park. However, 18-year-old Parag showed some fightback as he almost took an excellent catch on the boundary ropes.

During the fifth ball of Shreyas Gopal’s first over of the match, Agarwal smashed the floated delivery towards long-on which looked six-bound. However, Parag leaped up and caught the ball and managed to have the presence of him to throw the ball inside the ball while he himself fell over the boundary ropes.

With this, he not only saved showed off his excellent fielding abilities but also saved five valuable runs of RR. Here is the video of the brilliant save:

However, for KXIP, Mayank Agarwal (106 off 50 balls) and KL Rahul (59 off 54 balls) did a brilliant job as they amassed as many as 183 runs for the opening wicket. Eventually, Punjab reached a humongous total of  223/2 in their quota of 20 overs. For RR, on Ankit Rajput And Tom Curran managed to take a wicket but they had conceded as many as 39 and 44 runs respectively. In the last 10 over they had amassed as many as 105 runs. 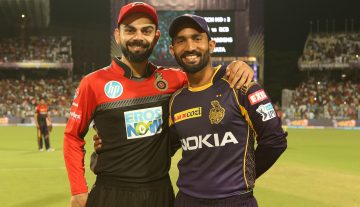