Youngster Riyan Parag has been going through a poor form and sometimes he gets trolled too. However, Rajasthan Royals’ (RR) talented batsman has experienced another poor outing with both bat and ball in his side’s first match against the Punjab Kings (PBKS) in the second phase of the Indian Premier League as well.

Parag could manage to score just 4 runs while playing only 5 deliveries. He also showed a disappointing performance with the ball and gave away 16 runs in the solitary over that he bowled as well. After this, fans started trolling him on social media. However, the 19-year-old cricketer has shared a message that he received from his mother on Whatsapp where she has asked her son to not stop believing in his abilities as well.

Meanwhile, the Rajasthan Royals (RR) beat the Punjab Kings in great fashion in their first match of IPL Phase 2. While the Punjab Kings needed just 4 runs off the last over, Kartik Tyagi did exceptionally well with the ball in the final over and conceded just a solitary run. With this, he helped the Rajasthan side win by 2 runs as well.

The Rajasthan Royals are currently placed at 5th place in the points table and have won 4 out of the 8 games so far. They will next play on 25th September 2021, when they take on the Delhi Capitals (DC) team. Parag has played 27 matches in the IPL and has amassed 328 runs which came at an average of 19.29. With the ball, he has claimed 3 wickets.

Kartik Tyagi, the Player of the Match said: “I was injured during the India leg of the IPL and by the time I got fit, the tournament was suspended. Felt sad. So this feels really good. I have been talking to people over the years and they keep telling me that things keep changing in this format, so I need to keep believing. I’ve always heard from everyone and also watched games in this format where strange things have happened. Today, I was fortunate to play a big role in something special. I was bowling a bit too short earlier, later worked on it consciously after getting a lot of feedback.”

Sanju Samson, the Rajasthan Royals captain said: “It’s funny that we kept believing (that we could win). I kept the overs of Mustafizur and Tyagi for the end, believing. Cricket is a funny game right. We just kept fighting and believing. I always believe in my bowlers, want to keep fighting and that’s why I kept those two overs till the end. To be very honest, to get that score on this wicket, we felt good because we had the bowling. If we took the catches, we could have won the game earlier. People have really worked hard on their fitness.” 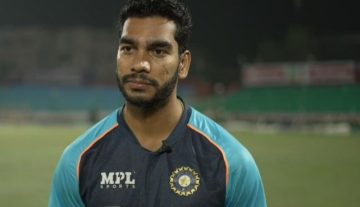