The Indian cricket team is the currently locking horns with Australia in the series decider of the three-match ODI series at the iconic Melbourne Cricket Ground (MCG). The young Indian spinner, Yuzvendra Chahal grabbed the priced dismissal of Marcus Stoinis before he can produce any threats for India and reduced the hosts to 123/5 in the 30 overs.

Earlier, the Indian skipper Virat Kohli decided to bowl first after the winning the toss in the overcast conditions at the MCG. His decision was justified by Bhuvneshwar Kumar who dismissed both the Aussies openers under the first 9 overs. India made three changes to their squad for the Melbourne ODI as Mohammad Siraj, Ambati Rayudu and Kuldeep Yadav made way for, Vijay Shankar, Kedar Jadhav, and Chahal.

Australia also made two changes to their squad as Nathan Lyon and Jason Behrendroff made way for Adam Zampa and Billy Standlake. Behrendroff has been facing some issues with his back.

WATCH – Chahal Bags Two In An Over, Dhoni Helps

On the third ball of the 30th over of the game, Chahal surprised Stoinis with his brilliant leg spin bowling. The leggie delivered a fizzing leg break which was drifting into middle and leg, it spun and with Stoinis being on the backfoot, closed the face of his bat in an attempt to push into the leg side, it catches the edge and Rohit Sharma, who was standing at the first slip dived low to his right to take a comfortable looking catch. Stoinis only managed to score 10 runs off 20 balls.

However, the Australian team was bundled out for 230 runs as Chahal bowled a spell of 6-42. Peter Handscomb was the highest scorer from the Aussies as he amassed 58 runs in 63 balls. 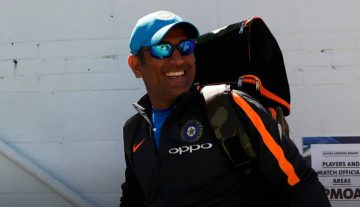 News
By CricShots - Jul 22, 2020
MS Dhoni Feels The Game Of Poker Has Similarities With Cricket