The dominating Indian top-order, KL Rahul, Rohit Sharma, and Virat Kohli’s performances are considered to be key to India’s success in the shortest format of the game. The trio did not let down that fact and the huge crowd that turned up at the Wankhede for the decider against West Indies.

Rohit set the platform for a humongous total as India scored of 240/3 in their quota of 20 overs. He scored a 34-ball 71 while Kohli raced to an unbeaten 29-ball 70 walking to bat at No.4 in the 13th over. KL Rahul stood still the last over and top-scored with a 56-ball 91 that included nine fours and 4 sixes. The three knocks helped India to finish with a match-winning score of 240/3.

All the stats and numbers recorded by the Indian batsmen in the Wankhede T20I:

1 – It had happened for the first time in T20 history that 3 three batsmen had scored 70+.

3 – Rohit and Rahul became only the 6th pair in Men’s T20Is to share three-century partnerships. Three of those six pairs are from India and all three involved Rohit.

7 – India recorded only the 7th instance of three players scoring fifties in the same T20I innings in Men’s cricket.

7 – The seven sixes by Virat Kohli are the most for him in T20I innings.

21 – Kohli scored his fifty in just 21 balls and it became the 5th fastest half-century for India in the T20I format. In fact, this is the fastest fifty by an Indian captain across the formats.

404 – Rohit became the first Indian and only the 3rd batsmen in International cricket to hit 400 sixes.

ALSO READ: KL Rahul Shares His Struggle Outside of the Team 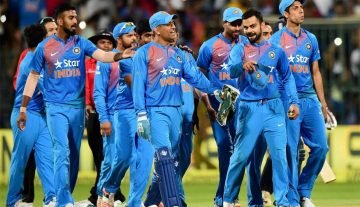 Article
By Aditya Pratap - Nov 1, 2017
Ashish Nehra thanks Kohli and Dhoni for their support