India’s stand-in skipper Rohit Sharma feels that the timing of his willow and ability to pick out the field are one of the crucial reasons for his growing list of huge scores in the limited over cricket.

Another example of that, just a week after scoring a double century, came in Indore when he smashed 118 runs from 43 balls against Sri Lanka. His hundred had come after just 35 balls to become the joint-fastest to the mark alongside David Miller. His excellent knock ensured India registered a three-match T20I series with a dead rubber to follow.

Talking about his century, Rohit said, “I definitely don’t have so much power. I rely a lot on timing the ball more than anything else. I know what my strengths are as well as my weaknesses. I try to play to the field as much as I can, to be honest.”

Sharma has registered three double centuries in ODIs to his name and two centuries in T20Is as well. When asked about if he makes any technical adjustments to play the long shots, the Mumbaikar replied: “The field is spread after six overs. I try and see where I can find my boundary options. It’s important to be able to play with the field. I want to score all around the park and not just one area. It’s important to explore the fielding the opposition keeps for me. In all formats, I try to do that. You can’t just hit in one area, you become predictable then. It’s always important to score runs all over the field and that’s my strength.”

However, Rohit stated that getting the men in blue into a strong position is more important than personal milestones, he said, “I was just thinking to score runs. I wasn’t thinking of any particular target. In all the formats, I don’t look to score runs to get to a particular milestone. My job is to go out there and score as many (runs) as possible. Not just 100s or 200s or 300s. I go out there to make sure I get my team into a good position. There are times when you don’t get runs. There are times when you get runs. That is all part and parcel of the game. Never do I ever walk out thinking that I want to score a century or a double century. I just want to give my best and get the team a victory.”

Rohit also talked about India’s commendable comeback in the limited-overs series after facing demoralizing innings in Dharamsala in the 1st ODI as they completely dominated the Lankans since then, he said, “There is a lot of pressure, especially after the first match in Dharamsala. We were in such a position that we were on the verge of getting all out on our lowest score. I thought a lot about my captaincy and team and that it is very difficult. We are representing 140 crore people and there is lot of pressure of that. Since I am leading the side for the first time, there was pressure and there will be pressure when we play next match in Mumbai. I don’t know when will I captain the side again, so every minute spent on the ground is important for me.” 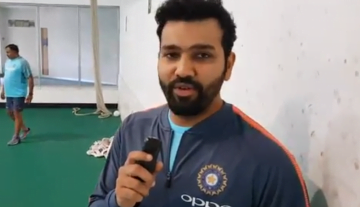