After losing the ODI series in Bangladesh, Team India started 2023 with a dominating whitewash against Sri Lanka in a three-match ODI series. Rohit Sharma, who made a comeback after his thumb injury, looked in good rhythm, while Virat Kohli slammed two tons in the three matches. Shubman Gill, who was picked ahead of Ishan Kishan, also had a solid outing, with the opener making his case strong by hitting a ton in the final encounter played at Thiruvananthapuram.

Team India now gears up for their next assignment, which is a limited-over series against New Zealand, starting from Wednesday. Ahead of the series opener captain Rohit Sharma confirmed that Ishan, who was not picked for any of the ODIs against Sri Lanka, will get a run but in a different batting position.

“Ishan will be batting middle-order, I’m glad that he can get a run here after a fine knock against Bangladesh,” the captain said on Tuesday.

Ishan became the fourth Indian after Sachin Tendulkar, Virender Sehwag, and Rohit Sharma to hit a double century in ODIs. The wicketkeeper-batter completed the feat in the final ODI against Bangladesh, which saw him hit 210 off 131 balls.

Despite the scintillating show, Ishan didn’t appear in any of the ODIs, something which was heavily criticized by fans and experts both at the start of the Sri Lanka ODIs. Now with a new batting position allotted to Ishan it will be interesting to see how India rejig their batting order. In all likelihood Ishan may come to bat in Shreyas Iyer’s position, who has been ruled out the contest due to a back injury.

Meanwhile, sharing his thoughts on the new challenge, the skipper noted: “Going into the series it’s pretty simple for us, we just want to keep improving as a team. Great opposition, great challenge, we can challenge ourselves to come out and achieve what we want to as a team. New Zealand is a very good team, they’re coming off a great series victory against Pakistan, so obviously they are playing some good cricket.” 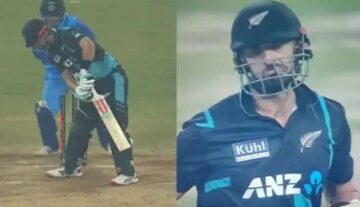