The veteran Australian cricketer, Steve Smith garnered a lot of limelight when some fans and former cricketers when he was seen scruffing the pitch at the striker’s end during the 3rd Test in Sydney. He was accused of not following the sportsman spirit and was even called a cheater as he was seemingly re-marking Rishabh Pant’s guard on Day 5 in Sydney. Cut to the 4th Test, India’s vice-captain Rohit Sharma was seen doing something similar.

Rohit was seen shadow batting at the striker’s end during the drinks break in the before lunch session of Day 4 of the final Test at the Gabba in Brisbane.

Sharma went up to the batting crease and started shadow batting. Incidentally, Steve Smith was in the middle and having a close watch at what the Indian opener was doing at the striker’s end.

Former India cricketer Sanjay Manjrekar, who was commentating for Sony Sports, pointed out that Rohit was shadow batting just like what Smith had done but that it was unfortunate to see the Australian cricketer facing the flak for his actions in Sydney.

ALSO READ: Mohammed Siraj Gets A Warm Hug From Bumrah After 5-wicket Haul

Steve Smith had rubbished allegations of cheating, saying he has the habit of shadow batting and what he did in Sydney was nothing more than that. Smith has slammed the allegations of scruffing the pitch as Australia were struggling to break a fledging stand between Pant and Cheteshwar Pujara on Day 5 of the drawn Sydney Test.

You see it’s not only @stevesmith49 who shadow bats at the crease when he’s in the field! #AUSvsIND pic.twitter.com/7MEGcA6pf0

Australia head coach Justin Langer had also hit out at Smith critics, saying he had never heard “so much rubbish” in his life. He had said, “We’ve laughed about how all he thinks about is batting. He was just standing there, thinking about batting. He is 100 percent innocent in this. Give me a break, I’ve never heard so much rubbish in my life.”

On Monday, Rohit Sharma took some phenomenal catch to dismiss Marnus Labuschagne who was looking to go big. Mohammed Siraj brought India right back into the game by dismissing Matthew Wade and Labuschagne in the same over. It was Shardul Thakur who broke open Australia’s 89-run opening stand on Day 4 by removing Marcus Harris. Washington Sundar was impressive yet again as he removed the dangerous David Warner for 48. Australia reached 149 for 4 at Lunch on Monday, stretching their lead to 182. 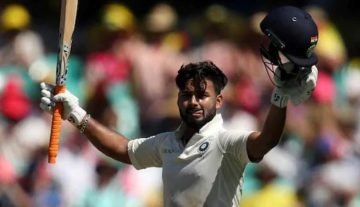