The veteran Indian opener, Rohit Sharma equaled former Indian skipper, MS Dhoni’s record of appearing in the most Twenty20 Internationals (T20I) appearances for India during the third match against South Africa in Bengaluru on Sunday. Rohit and Dhoni have now featured in 98 T20Is for India. The second in line is Suresh Raina, who has played as many as 78 games followed by Virat Kohli (72), Yuvraj Singh (58) and Shikhar Dhawan (55).

Making his record appearance for India, Rohit only managed to score just nine runs as he was sent back by Beuran Hendricks early. Rohit has scored 2443 T20I runs at an average of 32.45, which includes four centuries and 17 fifties. His highest score in the shortest format is 117 and is second in the list of most runs scorers in the shortest format.

In the T20I series against South Africa at home, Sharma has found it hard to get going. He managed to score only 12 runs in India’s win in Mohali and then failed to get into double-figures in the final match. Team India suffered a dominating loss against South Africa in the third and the T20I of the three-match series at the M Chinnaswamy stadium in Bengaluru.

After winning the toss, the Indian skipper, Virat Kohli decided to bat first citing to test the batting ahead of the T20 World Cup. The decision didn’t come out as per the expectations as the Proteas chased down the meager target of 135 with 19 balls to spare and 9 wickets in hand.

The South African team started off the chase of 135 started off well as they were 76 without loss in the first 10 overs with Reeza Hendricks and De Kock going great guns. However, Hardik Pandya came out in the 11th over to dismiss Hendricks owing to a brilliant catch by Kohli. After his dismissal, De Kock (79*) along with Temba Bavuma (27) helped the Proteas to chase down the total quite easily in the 17th over as most of the Indian bowlers were seen struggling

India will host South Africa in a three-Test series starting from October 2 in Visakhapatnam. 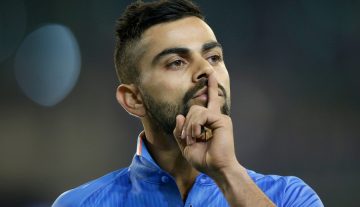 Article
By CricShots - Jun 24, 2017
7 most fearless Indian cricketers in the history of cricket