The veteran Indian opener, Rohit Sharma failed to prove his worth yet again during the ongoing Test against Australian at Gabba. He was on top of the Australian bowlers, had helped himself to 44, but ended up playing an irresponsible shot just when things were going smoothly ended his stay at the crease. The ‘Hitman’ just gifted his wicket away to the Aussies and it triggered some anger amongst his fans.

The wily Nathan Lyon planned well to dismiss Rohit Sharma as he had placed a deep square leg and a long-on in place. Lyon delivered a flighted ball, and Sharma fell to the trap. The opener charged down the pitch only to smack the ball straight to Mitchell Starc at Long on. Even batting great Sunil Gavaskar lambasted Rohit and termed his dismissal as an irresponsible one.

Even the netizens were seen expressing their frustration and anger and blasted the ‘Hitman’ for his dismissal. He scored 44 runs off 74 deliveries with six glorious fours and he was looking good for a big score. At the stroke of Tea, the Indian scorecard read 62/2. Cheteshwar Pujara and Ajinkya Rahane are currently occupying the crease for the visitors. The highly impressive Shubman Gill failed to get going at Gabba.

To a probing delivery from Pat Cummins, Gill poked at the cherry, edged it and the ball landed into the waiting hands of Steve Smith. Gill departed, after having scored just 7 runs. The final session of the day would be very important from an Indian perspective. Skipper Ajinkya Rahane and veteran batsman Cheteshwar Pujara will have to make sure that they forge a partnership.

On the other hand, Australia will be looking to find a breakthrough, by dismissing either, or even both Rahane and Pujara as the visitors are still trailing by 307 runs and there is a long way to go in this Test match.

It was the debutant’s day out with the ball for India as T Natarajan and Washington Sundar picked up three wickets apiece. It remains to be seen how this Test match will pan out, with three full days left in the match. Now, a lot will depend on the Indian batsmen to get as close as possible to Australia’s first innings total.

Considering the experience missing in the team, that shot from an experienced Rohit Sharma was inexcusable. #AUSvsIND

Big moment in the game. Rohit had started looking ominous for Australia.

Such an unnecessary and rash shot. Rohit did the same in the second innings in Sydney. Just when you think India were clawing their way back after an early wicket, they just swing thr momentum back Australia’s way!

44*(73) with no demons in the pitch & you’re well set. I’m sure Rohit Sharma will be very disappointed with his shot selection. He’s a world class player! Being a senior player with a Test series levelled at 1-1 (just to give context to the series) that was a big wicket #AUSvIND

Only Rohit Sharma can stop himself from making a big score and we saw in the last three innings in Australia.

Thought I was missing one. 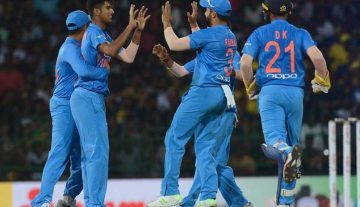