India have produced many great captains and MS Dhoni is one of them without any doubt. But he has been out of the action since India lost the semi-final in the 2019 World Cup against New Zealand. He has missed all the home series so far against South Africa, West Indies, Bangladesh and recently Australia. However, he has start practising for the upcoming Indian Premier League where he will play for Chennai Super Kings. Recently swashbuckling India opener Rohit Sharma named MS Dhoni as the best skipper the country has had.

“MS Dhoni is the one who has been like that. It’s in-born. It has helped him to make such good decisions on the field and now you see he is the most successful Indian captain with all three ICC trophies with him and many IPL titles as well. He is the best captain India has seen and there’s a reason behind it – which is being calm and composed under a situation,” Rohit Sharma said in one of the episodes of Curly Tales.

Even after Virat Kohli took over the responsibility, Dhoni continued to rule the hearts of the fans and also a key member in the team who always guides the youngsters and helps in decision making as well. While talking about that, Rohit Sharma has shared his views too.

“I have seen him handle a lot of young bowlers when they get under pressure, he just goes and puts his arm around them and talks to them about what needs to be done. When a younger player is treated like that by a senior member of the team, you obviously feel confident and you want to deliver for the team,” he added on Dhoni’s ability.

However, India recently got a big blow as Rohit has been ruled out of the upcoming ODI and Test series due to his calf muscle injury. It is worth mentioning, India have whitewashed New Zealand in the five-match T20I series recently. 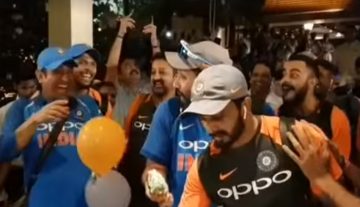