Former Indian fast bowler, Rudra Pratap Singh senior represented the Indian team in the year 1986 as he played a couple of ODIs against Allan Border-led Australian team. However, He failed to have a significant impact and as a result, was dropped from the side. RP Singh decided to migrate to England after his cricketing career went downhill in the late 1990s.

The right-arm fast bowler was part of the England and Wales Cricket Board and Lancashire County’s local coaching setup. The Lucknow-born cricketer still has an immense passion for what’s called the ‘Gentlemen’s game. His daughter was famously part of the Lancashire Under-19 cricket team before she made a decision to move away from the game.

In a piece of delightful news, the son of RP Singh senior namely Harry Singh has received his first ever call for the England U-19 team. He is set to represent the English team in their upcoming assignment against Sri Lanka. Harry, who is the second opener of Lancashire’s second XI will be part of the upcoming home-bilateral series

The father of Harry has reacted to the fruitful development in his recent interaction with the Indian Express. He confirmed that the young opener received a call from the English board a few days back. Singh concluded by saying that the 19-year-old will have to make crucial adjustments in his batting before featuring in the ‘International’ Sri Lanka games.

ALSO READ: Scott Styris Feels Will Not Be Able To Cement His Place In Team India

Explaining the same, RP Singh senior said, “A few days ago, we got a call from the ECB that Harry has been picked for the England U-19 team, which will play the Sri Lanka U-19 team at home. It’s not easy, you need a bit of luck and lots of runs to make it at the top level. I have seen many cricketers in the 90s who used to do well in domestic cricket, but they failed drastically when they represented the Indian team. As Harry grows, he will have to make those technical adjustments that every cricketer does.” 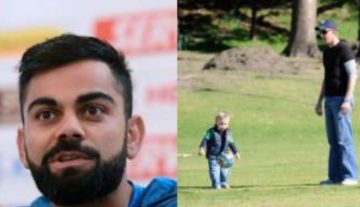 News
By CricShots - Jul 13, 2022
Brett Lee Reveals A Brilliant Gesture From Virat Kohli For His Son