The batting legend, Sachin Tendulkar has been confined to his Mumbai house ever since the coronavirus took rise in India. He has been one of the top athletes to have donated generously for supporting the affected people due to the pandemic. The 47-year-old has taken part in various campaigns to curb the massive outbreak of the novel coronavirus in the country. From taking care of the flooding of thousands to helping financially, Sachin Tendulkar has proved that he is a ‘Bharat Ratna’ for a reason.

Tendulkar is also someone who loves visiting places in his free time after retirement. Cooking is also something he is fond of and often treats his friends and families to the delicious cuisines prepared by him. But in such unprecedented scenarios, Tendulkar is missing both. However, he has something new to cheer about now.

A ‘new visitor’ and now a friend paid a surprise visit last week while Sachin was preparing his favorite Mumbai snack, Vada Pava. The visitor had looked “keen to have one too.”

The legendary cricketer took to Instagram on Tuesday to reveal that his ‘new friend’ has revisited him. The new friend is talking about a cat! Yes, you heard it right. In the video, Sachin can be seen with the cat which is getting all cozy with the master blaster. A lucky cat indeed! Tendulkar speculated that his ‘new friend’ might be missing the Vada Pav from last week.

Captioning the video on Instagram, Sachin wrote: “My new friend is back! Looks like he’s missing the Vada Pav from the last visit”.

My new friend is back! Looks like he's missing the Vada Pav from the last visit. 😋 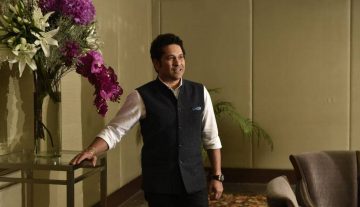