The legendary Indian cricketer, Sachin Tendulkar became a guide to the young protege Prithvi Shaw, helping him deal with life on and off the cricket field during his rough patch. The 20-year-old had a memorable Test debut as the second youngest Test centurion from India before an ankle injury and 8 months ban a failed dope test kept him out for 16 months. Some disciplinary issues have also been talked about quite often in Indian cricket circles for some time now.

However, during an interaction with PTI, Sachin revealed, “Yes, it’s true. I have had a number of interactions over the years with Prithvi. He is a very talented player and I am happy to help him. I spoke to him about cricket and also about life beyond the cricket field.”

However, Tendulkar was not comfortable revealing the discussion he had during his multiple sessions with Shaw. But Shaw, of late, has been very vocal about the guidance he got from the senior Mumbaikar. Sachin said that he has always been open to guiding youngsters who would seek him out individually.

The batting legend revealed, “I have spoken and guided a lot of youngsters at an individual level. I have maintained that if anyone feels that I can be of any help in guiding them about their game, I am always open to the idea.”

Not only Shaw, even the Indian skipper Virat Kohli sought Tendulkar’s suggestions as recently as the Pink Ball Test against Bangladesh in November last year.

Kohli had explained, “I spoke to Sachin paaji on the evening of the first day and he made a very interesting point as well. Probably with the pink ball, you have to treat the second session like the morning session when it’s getting darker and the ball starts to swing and seam. So first session you invariably play like you play from lunch to tea in a normal timing Test match, then the second session would be like a morning session and the last session is like that evening session.” 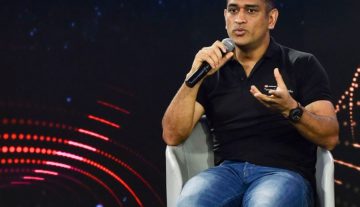 News
By CricShots - May 7, 2020
MS Dhoni Reveals When He Felt Scared While Batting