Bollywood superstar Salman Khan’s favourite cricketer is none other than former India captain Mahendra Singh Dhoni. He referred Dhnias the “Dabangg” player. On Star Sports’ pre-show Nerolac Cricket Live, Salman spoke about how much he admires the ‘dabangg’ style of MS Dhoni.

“I personally know Kedar Jadhav…Also, my favourite cricketer is MS Dhoni. He is a Dabangg player,” Salman said.

Salman was accompanied by another superstar Kiccha Sudeep, who is playing the villain in the third instalment of the Dabangg movie.

“My favourite player is the one who plays well on that day. But what we see as fans is the respect each player has towards each other,” Sudeep said. “We can visibly see the players stand and cheer for the achievements of their teammates – with such a positive attitude, we can freely have our favourites. My all time favourite has to be Anil Kumble sir, and I also like Rohit Sharma.”

As far as former India captain MS Dhoni is concerned, he has been out of the action ever since India lost to New Zealand against New Zealand in the semi-finals of the ICC World Cup in July. His break made the speculations of his retirement as well whereas BCCI chief Sourav Ganguly said that there is time to think on Dhoni’s future. Recently, Ravi Shastri also shared his views on MS Dhoni where he said only Dhoni knows whether his body will be able to cope up with all the rigours of international cricket after a break or not.

“It’s sensible (the break by Dhoni). I like the time (around IPL) when he will be starting to play again. I don’t think he is too keen on the one-day stuff. He is finished with Test cricket. T20 is an option. It’s a format that is tailor-made for him. But will his body be able to cope with the demands, only he will answer,” Shastri told ‘India Today’.

“The rest would have done him a world of good, mentally. That mental fatigue would have gone away by now. If he decides to play, which he will because he will play the IPL, then he will start training with a very fresh mind. Then you have got to see form,” said Shastri. 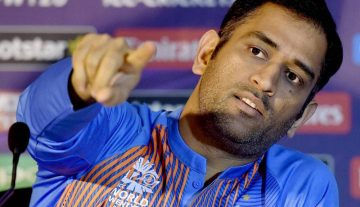 Article
By CricShots - May 22, 2017
Some controversies related to the career of MS Dhoni