Indian skipper Virat Kohli has been in sensational form since the start of 2016. In the process, he notched up 2500+ international runs in the last three calendar years. Hence, he became the first ever cricketer in history to achieve this rare feat.

“Everything about Virat’s game stands out. I think he is head and shoulders above anyone else in world cricket today. And I think going forward, he will be one of the greatest ever cricketers, if not the greatest ever,” Sangakkara told India Today.

Kohli has scored 25 Test hundreds while he notched up 39 centuries in One-Day International cricket. Sangakkara added that Kohli is a very passionate guy who has an incredible knack of scoring runs.

“He has this incredible knack of scoring runs and has a very very solid method that he believes in and is very repeatable and if you see the tempo which he bats with, it hardly changes. He does read the situation very well. He is a very passionate guy, you see that in his expressions on the field so I think it’s not just one aspect, it’s the overall aspect of both the person and how he has sorted his batting and his attitude,” Sangakkara said.

A month ago, most the fans and former players were busy debating over whether MS Dhoni should retire from the game. His form was showing no signs of improvement and the emergence of Rishabh Pant only made things worse for him. Dhoni had a forgettable outing in 2018.

With Dhoni looking in good form at the moment, Sangakkara feels the Indian wicketkeeper has secured his place in the team despite stiff competition from the likes of Karthik and Pant.

Sangakkara said, “Rishabh Pant has been an outstanding discovery for India. So competition for places whether you are young or old actually drives you to do better. It just depends on how you take it. Whether you look at it as an opportunity or a threat. I think MS is quite secure about who he is and how he has gone about it and I think he understands people very well. So he will understand how to navigate those issues not just about selection but also personalities in the dressing room.”

After missing the last phase of New Zealand tour, Kohli will be back in action from February 24 against Australia. Both teams will play two T20Is before heading into the five-match ODI series. 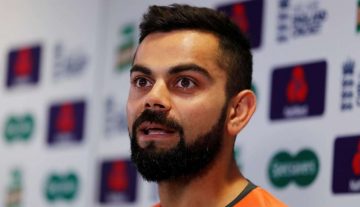 Article
By CricShots - Aug 1, 2018
Eng vs Ind: Virat Kohli Is least Bothered About His Performance In England