A much-fitter Sarfaraz spoke to ESPNcricinfo about coming back to the team, reinventing himself, and also the triple hundred against UP. He said, “It’s a proud feeling to return and also join Mumbai’s triple-century club, alongside great players like Sachin Tendulkar, Sunil Gavaskar, Wasim Jaffer, and Rohit Sharma. There was this fear in my mind that half the season had finished and I hadn’t yet made any kind of impact. So this triple century came at the right time.”

ALSO READ: No Change In Timings For The Night Games For IPL 2020

To make a switch back to Mumbai, the youngster had to miss the entire domestic season last year because of the cooling-off period. It was enough for him to gain some confidence as a player.

Sarfaraz said, “The last two years have been very frustrating. Everyone thought I was only a white-ball player. Deep down, I knew I was a good enough red-ball player too, but I didn’t have too many opportunities to prove it. Then I had to serve out a cooling-off period in Mumbai, so I used the time to work on my game. I used to play on seaming wickets, my father kept hurling balls at me and I was only focused on leaving the ball. It became a habit.”

The biggest low in Sarfaraz’s career could be when was dropped from the RCB in 2016, for lack of fitness. In fact skipper Virat Kohli talked to him about this aspect, that Sarfaraz needed to work upon.

Talking about the experience, the fiery batsman said, “I was dropped at Royal Challengers Bangalore (RCB) in 2016 because of my fitness. Virat Kohli told me straightaway while there were no doubts over my skills, my fitness was not letting me get to the next level. I really had no idea about fitness until I came into the Under-19 level. But I was still retained by RCB in 2018.”

Now that the bad phase of his career is behind him, Sarfaraz wants to keep fit and keep scoring runs, without putting pressure on himself. 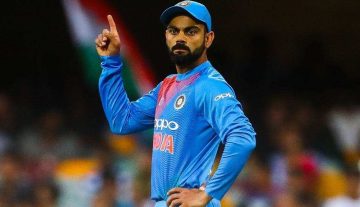 News
By CricShots - Jan 30, 2019
Virat Kohli Will Celebrate His 32nd Birthday At The Adelaide Oval?