News
Sarfaraz Khan shares his first-class record on Instagram after not being selected for Test series
By SMCS - Jan 15, 2023 1:01 pm
Views 40

Mumbai’s middle order batter Sarfaraz Khan has once again been overlooked as a 17-member Indian squad announced for the Border-Gavaskar Trophy against Australia, which is set to begin in February. The gutted Mumbai batter shared an Instagram story of his stunning record in the first-class format as a reminder to the Chetan Sharma-led India selection committee as well.

However, Sarfaraz Khan used an Instagram post where his first-class record was included only after the legendary Don Bradman amongst batters that have played a minimum of 50 innings as well. The batter has been in sublime form off late and has topped the Ranji Trophy charts as well. India however, decided to give wicket-keeper batter Ishan Kishan his maiden Test match call-up after his stunning double century against Bangladesh in the ODI format as well.

Sarfaraz Khan has been in good form in the current season of the Ranji Trophy also and has scored 2 centuries and a half-century in 5 gamess. Meanwhile, Prithvi Shaw and Suryakumar Yadav have been given call-ups in T20I and Test squads respectively as well. Suryakumar Yadav, however, has earned call-ups in the ODI and T20I series as well. 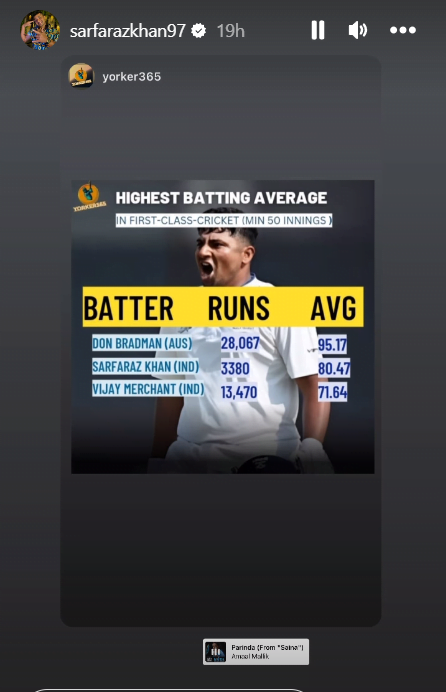 However, the BCCI announced 3 squads on Friday night, two against New Zealand and one against Australia for the first two Test matches as well. Hardik Pandya will lead India in the T20Is against New Zealand, while Rohit Sharma will be leading the teams in the rest two squads. The Australia Test series will be important for India as they are in the hunt to play the World Test Championship Final as well.

News
By SMCS - Feb 9, 2023
WATCH – Virat Kohli Drops Steve Smith In The First Session Of The Day 1 In The First Test