Cricket is one of the unpredictable sports all around the world. The batsmen and bowlers are consistently trying to go hard in each other in order to help their team win.

However, there have been some incidents when these sportsmen have not been cautioned and gotten injured during the game. Here are seven of the scariest injuries in cricket.

South African batsman Rilee Rossouw faced an ugly bouncer from Lasith Malinga in the Sri Lanka Premier League. He’ll surely be hoping that he doesn’t get to face one of those in future. It has been heard that the bouncer had haunted him for weeks.

Former South African batsman and former Indian coach Gary Kirsten is one of the most popular cricketers in his country. During a match at the Gaddafi stadium, he faced a fiery bouncer from Shoaib Akhtar. The Pakistani pacer’s ball rose sharply and hit Kirsten square on the eye. He was hurriedly taken to the hospital with ten stitches but returned for the second innings.

Indian opener Rohit Sharma suffered a forgettable injury when received an awkward short ball from Stuart Broad in the 2011 series. The Englishman injured Rohit on the first ball he faced with a rising delivery that hit him in the index finger. Rohit took a rest for three weeks due to which he wasn’t able to feature in the rest of the tournament.

Mark Boucher, former South African gloveman, left the field immediately at the end of the 46th over of Somerset’s innings in 2012 when a googly from Imran Tahir hit the stumps and a dislodged bail which struck Boucher in the left eye. This injury led to the end of Boucher’s career as well. 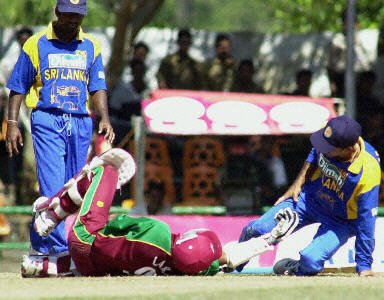 The Trinidadian legend Brian Lara was banged with Marvan Atapattu in a Test match back in 2001. As Lara was running, he collided with the Sri Lankan and was rigorously injured. Lara’s shoulder got dislocated and he also fractured his finger because of which he had to miss out on a lot of following matches.