The Indian left-arm spinner Shahbaz Nadeem, who made his Test debut last year against South Africa, on Thursday revealed how former captain MS Dhoni’s advice helped him get the wicket of Windies powerful opener, Chris Gayle during an IPL match against RCB. Nadeem said that he shared a dressing room with MS Dhoni when Chennai Super Kings (CSK) skipper joined the Jharkhand team for the 2017-18 Vijay Hazare Trophy.

Nadeem, who made his IPL debut in 2011, had never bowled to Chris Gayle by then and asked Dhoni on how to get the better of Windies star when he faces him.

During a chat with Aakash Chopra on his Youtube channel, Nadeem said, “Why I started bowling the Chinaman again was because whenever I had played in the IPL, I had never bowled against Gayle. So, it was always in my mind and people also used to say that Gayle bashes the left-arm spinners a lot, so how should I escape.”

He further added, “So, I used to say that I will bowl the Chinaman to him. So just thinking about Gayle I practiced the Chinaman for two years.”

Moreover, Nadeem remembered, getting Gayle out with the same delivery when he was playing for the Delhi Daredevils (now Capitals) against the Royal Challengers Bangalore (RCB).

Recalling his chat with Dhoni, Shahbaz said, “Once I was speaking to Mahi bhai when he came to play Vijay Hazare. I asked him everyone else is fine, but what should be bowled to Gayle as a left-arm spinner. His reply was ‘First of all, you should not bowl to him at all.’ But if you need to bowl, try not to give him the ball in his arc. Either bowl outside his range or close to his pads, so that he takes a single’,.” 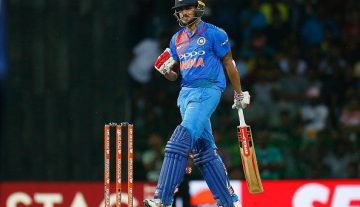