After persisting a long time in First-Class cricket, left-arm off-spinner Shahbaz Nadeem finally made his debut in the Test series against the South Africa. Nadeem, who made his First-Class debut for Jharkhand in 2004 finally played his first Test in Ranchi after left-arm leg-spinner Kuldeep Yadav has suffered from a shoulder injury. India once again dominated the Test and thrashed South Africa by an innings & 202 runs and Nadeem claimed four wickets which included the last two batsmen of South Africa in their second innings.

After the game, Shahbaz Nadeem praised captain Virat Kohli and referred to as the best captain in the world. He also shared how he and Virat Kohli were discussing wickets and other things during the match.

“Virat (Kohli) is an amazing captain. I must say he is the best captain in the world. He leads by example. I am happy that I took four wickets in the match. I have played a lot of domestic matches and have a lot of experience. I want to use all of that experience in my international career. I am happy with my debut,” Shahbaz Nadeem has said as quoted by Times of India.

“Both of us (Kohli and I) were discussing wickets and different situations during the match. Our plans worked really well against South Africa. This Indian team is the best in the world. Virat is a born leader. Not just on the field, (but) he also keeps the dressing room atmosphere alive. He helps every bowler on the field. With his aggression and batting prowess, he has taken Indian cricket to another level. I want to thank him for showing confidence in me,” the left-arm off-spinner further added. “When Virat was given the winners trophy, he, along with all the team members, asked me to hold the trophy.” 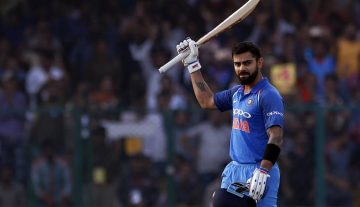