Just moments after International Cricket Council (ICC) verified that the Board of Control for Cricket in India (BCCI) had taken prior permission from the apex body before allowing the Indian players to wear the camouflage-style army caps in the third ODI versus Australia at Ranchi, former Pakistan all-rounder, Shahid Afridi opined on the move during his Pakistan Super League (PSL) press conference on Monday. When asked about the cap and India’s move, Afridi came up with a hilarious reply.

During the press conference on Monday, Afridi was asked by a journalist about his thoughts on Team India wearing army caps paying their respects to the Pulwama terror attack victims.

While manager Nadeem Khan intervened to urge reporters to ask questions related to the game, the reporter clarified that the question was based on the fact that Afridi is a Pakistani. And that is when the former cricketer replied with a smile: “Caps pehni to utar bi deen (They wore but took it off as well)”

Earlier in the evening, ICC spokesperson responded to ANI on Team India sporting the camouflage caps against Australia. He said, “The BCCI sought permission from the ICC to wear the caps as part of a fundraising drive and in memory of fallen soldiers (in Pulwama attack), which was granted.”

India’s move did not go down well with Pakistan Cricket Board who had written a strong letter to ICC on Sunday saying that sports and politics should not be mixed together.

“There’s absolutely no misunderstanding in the ICC about our position,” PCB boss Ehsan Mani said late on Sunday in Karachi. “We believe that cricket and sports should not be used for politics and we have said this very clearly. Their [India’s] credibility in the cricketing world has gone down very badly.”

In the past, ICC had taken actions against two players – Imran Tahir and Moeen Ali – for showing political sentiments during a match. Moeen was banned five years ago for donning an armband which showed ‘Save Gaza’ and ‘Free Palestine’ in a match against India. On the other hand, Tahir was reprimanded for displaying the image of a Pakistan pop singer Junaid Jamshed beneath his national jersey during a T20I against Sri Lanka in 2009. 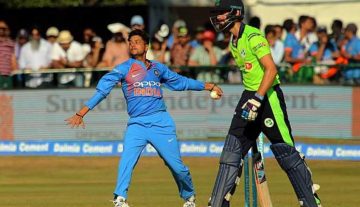