The veteran Bangladesh all-rounder, Shakib Al Hasan has often been seen showing questionable behavior on the field during his cricketing career. Recently, a video has been making rounds on social media in which Shakib can be seen arguing and almost threatening an umpire during a domestic match. Something similar was seen during the ongoing Dhaka Premier Division Twenty20 Cricket League match between Shakib Al Hasan’s Mohammedan Sporting Club and Abahani Limited on June 11, 2021.

In the video, Shakib Al Hasan can be seen arguing with the umpire about decisions and even got physical, kicking, and uprooting stumps in two separate incidents during the game. In teh first all-rounder, teh veteran all-rounder was appealing vigorously for an apparent LBW.

The wicketkeeper and close-in fielders came close to the umpire while appealing, but Shakib turns sour when the umpire doesn’t raise his finger immediately. The argument between Shakib and umpire continued for a long time in the clip shared on Twitter, as other players also gather around the umpire and start protesting about the decision.

Shit Shakib..! You cannot do this. YOU CANNOT DO THIS. #DhakaLeague It’s a shame. pic.twitter.com/WPlO1cByZZ

In the second incident of the same game, Shakib Al Hasan was seen getting more aggressive with the umpire, after something happens and the Mohammedan players begin protesting.

As the wicketkeeper came towards teh umpire while protesting, Shakib Al Hasan can be seen entering the frame in the video arguing with the umpire, making various gestures. He approaches the umpire and in a tantrum of sorts, uproots all the three stumps with his hands and throws them away.

Shakib then continues to argue with the umpire even as the players leave the field and the other umpire comes to the aid of his fellow officers, all the while Shakib continuing his rant, with other Mohammedan players gathering as well.

One more… Shakib completely lost his cool. Twice in a single game. #DhakaLeague Such a shame! Words fell short to describe these… Chih… pic.twitter.com/iUDxbDHcXZ 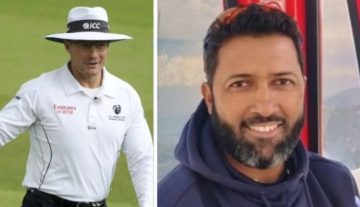