Bangladesh was so close to winning the 2018 Nidahas Trophy but Indian wicketkeeper-batsman Dinesh Karthik’s superb thrashing knock denied that. However, Bangladesh captain Shakib Al Hasan pleased with the team’s effort as he quoted “This might be the start of a new chapter for Bangladesh”.

In the final match of the Nidahas Trophy, Bangladesh was on top before the last two overs. India needed 34 runs in last 12 balls while Dinesh Karthik just came to the crease and played the smashing innings including the last ball six.

Talking about the final match, Shakib said after the match, “You learn more things when you lose a game. We could have rectified so many small things which could have gone our way and we could have won easily. These things happen in cricket, which is why T20 is so exciting. India was almost out of the game [before Karthik started hitting]. I think we did well for 38 overs except for the Miraz over at the start and the second last over when Rubel went for 22 runs.”

Shakib credited Dinesh Karthik for the tremendous victory. He commented about the new Kolkata Knight Riders’ (KKR) captain, “Credit goes to Dinesh Karthik for the way he batted. It is not an easy thing to do to hit a low full-toss like that. Five of the eight balls he faced went for boundaries. I think he hit three sixes. It was amazing hitting. We were so close, but India were on the winning side in the end. But you can’t take anything away from us, with the way we played in this tournament, and today. We showed some good character and played in the right spirit. I can’t ask for more from my team.”

Shakib also explained that why he brought Rubel Hossain in the 19th over while he had no regular bowler for the last over.

He told, “When Mustafizur bowled that brilliant over, India needed 34 off the last two overs. Rubel was our best bowler today after the way he bowled the first three overs. I believed in him. I thought even if he bowled badly, he would go for 15 runs. I would have 20 runs to play in the last two overs, which would have given Soumya some cushion. It was the plan behind bringing Rubel in the 19th over.

Shakib also backed Rubel by telling, “He (Rubel) didn’t miss by much. I don’t know many batsmen who can hit a six off the first ball, and then keep hitting the boundaries. There are very few instances in history. There was something otherworldly about it. He got nervous after going for 10 runs off the first two balls. I still feel that I will back him the next time such a situation comes.”

Shakib is now looking forward as he quoted, “What’s the point of crying now? You can be emotional. There’s nothing much we can do in this situation. I hope we learn from these narrow defeats, and this has been our narrowest loss in a final. I think we are progressing.

Shakib believes they were 4-5 runs short as his ideal score for the final was 170. He spoke out on that, “It was a tough period for us when we lost three quick wickets. If we played better, we may have scored more runs. I think overall we were 10-15 runs short but if someone asked me at the start of the game what was my ideal score in a final, I would have said 170. So I think we made 4-5 runs short. We came back very well with the ball, which shows our character with the ball. I don’t see a lot of negatives, except that we lost the game.”

Shakib also said that the bowled tried their best. He said, “I don’t know if it is nerve or luck. Nine runs in one over isn’t a lot but then you end up defending five runs off the last ball. You’d back a bowling team when they are defending 35 of the last two overs. It just didn’t happen for us. The bowlers tried their best.”

He further added, “There are many positives. We are scoring consistently. Some of our bowlers did really well. We fielded really well too. We needed that extra edge, and hopefully we will get better.” 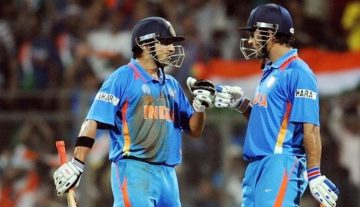