Currently, the Sunrises Hyderabad (SRH) are taking on Mumbai Indians (MI) at the Rajiv Gandhi International Stadium in Hyderabad. After winning the toss, the SRh skipper, Bhuvneshwar Kumar decided to bowl first on a tricky pitch and bowlers didn’t disappoint at all. Mumbai was reeling at 43-3 after 9 overs.

During the toss, the MI skipper, Rohit Sharma revealed that they have made two changes in their squad Yuvraj Singh and Lasith Malinga made way for Ishant Kishan and Alzarri Joseph. On the other hand, SRH made no changes to the squad as Kane Williamson is still not completely fit.

Mumbai had a forgettable start to their innings, as Rohit got two back-to-back lifelines in the first over of the match itself. However, in the 4th over, as he finally got dismissed by Mohammad Nabi. Then came Surya Kumar Yadav. Who also got out in the 6th over by Sandeep Sharma and after that Quinton de Kock and Krunal Pandya also got out as MI was struggling at 63/4 after 12 overs. In the next over itself, Kishan also got dismissed owing to the brilliance of Jonny Bairstow and Vijay Shankar.

WATCH  – Dhoni Creates Magic And KL Rahul Gets A Lifeline

On the penultimate ball of the 13th overs, Ishan wanted a run after edging the ball towards the cover. But Kieron Pollard sent him back. Kishan was half-way onto the pitch and after watching that, Vijay threw towards Baitsow who broke the stumps. Before grabbing the ball, Jonny had dislodged the bails and he had to puck out the stumps and he did the same still, Kishan didn’t manage to get back as Bairstow managed to uproot the stumps before Kishan could complete his dive in by millimeters. 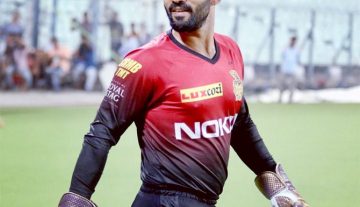