The Indian all-rounder, Vijay Shankar is looking forward to batting at number four if asked during the upcoming World Cup, but he isn’t considering Hardik Pandya as competition in India’s playing eleven during the World Cup. In recent times, he has been projected as a possible candidate for the number four position after some impressive performances in New Zealand.

Talking about the same, as per the quotes in PTI, Shankar said, “I don’t think I am competing with Hardik. He is a terrific cricketer. Yes, we are all-rounders but we are different from each other. And why do we need to compete? It would be great if both of us can contribute to India’s victory.”

Both Shankar and Pandya possess the ability to hit big sixes, the latter uses a bit more brute power with his impeccable timing, but for Shankar, it’s more about the body balance while taking the aerial route.

Explaining the same, Vijay said, “I love hitting those big sixes. The key for me is to retain my shape. I have not been successful when I have tried to muscle the ball but whenever I have held shape, the ball has gone into the stands. The series against New Zealand was a great confidence-booster as I could score that 40 odd in touch conditions when the team needed me.”

While the Indian World Cup player was asked to relax and de-stress before the big event, Shankar was busy training in Chennai, trying to work on a few “technical issues“. Earlier, he started as a medium pacer, but now at times bowls up to 135 kmph. He also said that he has no shame in seeking solutions from skipper Virat Kohli, MS Dhoni or coach Ravi Shastri.

ALSO READ: Virat Kohli Terms It As The Most Challenging Tournament

Shankar described, “Yes, I am a quiet person off the field. But if I need to ask anything, I can go up to Mahi bhai or Virat and pick their brains and they are happy to answer. I am not shy when it comes to asking questions.” 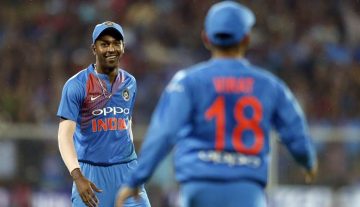