The Indian opener Shikhar Dhawan didn’t have a memorable outing during the recently concluded 5-match Test series on the English soil. He played four Tests, at Edgbaston, Trent Bridge, The Ageas Bowl, and Kennington Oval respectively, but unfortunately, couldn’t make an impact.

Subsequently, Shikhar faced a lot of criticism, both form the supporters as well as the cricketing pundits. Yesterday, he scored a deserving century against Hong Kong, which helped the Men in Blue defeat Hong Kong in a closely fought contest at Dubai International Cricket Stadium in the Asia Cup.

The Delhi-born cricketer southpaw reckons that failures shouldn’t overshadow the importance of victories. He highlighted the same by citing Ambati Rayudu’s gutsy half-century in the match.

Talking about his game as quoted in Times Now, Dhawan said, “It wasn’t a question of form, I was batting well but wasn’t getting runs. Great to get runs also. We have won so many series in the last four years and we have also lost some. We are humans. The concern should not be such that everything else, all the good results are forgotten. Some failures should not overshadow all the wins. Just look at (Ambati) Rayudu, he was so good, and he was playing after such a long time. So, it’s good.”

After India put on a decent total of 285 runs for the loss of seven wickets, the Hong Kong openers Anshuman Rath and Nizakat Khan put on 174 runs for the first wicket and kept India at bay. The pacers, especially Bhuvneshwar Kumar and Shardul Thakur struggled to find thi rhythm. In the meantime, Dhawan also backed them and acknowledged that India didn’t expect Rath and Nizakat to build such a stand.

Shikhar elaborated, “We didn’t expect for them to score 170-run partnership but they played well. We could have been more consistent in our bowling but we have to give credit to their batsmen, the openers played well. They were calculative, have to appreciate that. here wasn’t much swing or seam in the wicket and our bowlers were coming after a break. It takes time to get into the rhythm as well. Bhuvi (Bhuvneshwar Kumar) was coming back after a break and Shardul (Thakur) hadn’t played much in England.” 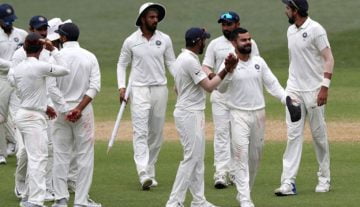