Team India is locking horns with Bangladesh in the first Test at Chattogram on Wednesday and the Men in Blue got off to a good start as they almost reached the 300-run mark on Day 1 itself. Middle-order batsman Shreyas Iyer had lady luck smiling on him as he got bowled, but the bails didn’t fall off, thus he was not given out.

The incident took place on the fourth ball of Ebadot Hossain’s 15th over, while Iyer was batting at 77. Bangladesh had just received the new ball and Hossain utilized it fully, as he delivered a good length delivery which just evaded Iyer’s bat and grazed his stumps.

The bails lit up and Bangladesh players first celebrated but later realized that the bails didn’t fall off. According to the rules, the bails have to fall down for the batter to be declared out, and despite the ball hitting the stumps, Iyer survived, much to the fans’ bemusement. Even Shreyas Iyer and his batting partner Cheteshwar Pujara were seen laughing at the incident.

Here is the video of Shreyas Iyer surviving as bails don’t fall off:

What luck! Incredible Lux Cozi for Shreyas Iyer! The ball kisses the stumps but the bails don't fall. pic.twitter.com/WPfN8nrIAA

India ended the opening day of the first Test on 278/6 with Shreyas Iyer remaining unbeaten on 82. Cheteshwar Pujara was another star batter for India scoring 90 runs and was unlucky not to get to the three-figure mark. Axar Patel then did well to score 14 runs but Mehidy Hasan Miraz breached his defense on the last ball of the day to make it a decent day for Bangladesh.

ALSO READ: Shubman Gill Gets Trolled For Wasting An Opportunity In Chattogram

Taijul Islam was the best bowler of the day for Bangladesh picking up three wickets for 84 runs after bowling one-third number of overs in the day. He would be hoping to scalp a 5-fer now on the second day and skittle India out early. 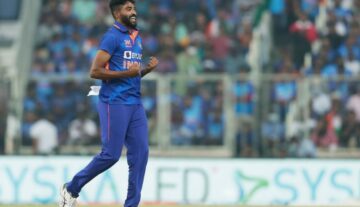