The young Indian protege, Shubman Gill became a household name when he was named as the man of the tournament after top-scoring for India in the 2018 Under-19 World Cup. Gill’s terrific form with the bat was one of the reasons why India won the Under-19 World Cup in New Zealand. Gill has often received praise from many experts and players as they consider himself as the future of Indian cricket.

During an interaction with his IPL franchise Kolkata Knight Riders (KKR), Gill recalled Hardik Pandya’s hilarious sledge while playing a one-day game against Baroda during his first season in domestic cricket. Shubman recalled how Hardik attempted to get under his skin during a domestic 50-over game.

Here is the video of the interaction:

Shubman Gill recalled, “It was my year of Ranji Trophy season and we were playing a one-day against Baroda and I remember Hardik bowling to me and he kept on sledging me, I don’t know for what reason.”

The youngster also reminisced him starting to play domestic cricket for Punjab as he said that he tried to hit Hardik’s ball on the up, which turned him angry and led to one of the funniest sledges he has ever across on the field.

Gill explained, “Actually he was bowling to me and I tried to hit him on the up and the ball went straight to the fielder and then he kept on sledging me and saying “Ae chal na maar na! Chal na ye 19 nahi hai ye. Chal na maar na (C’mon hit me, this is not Under-19 cricket, hit me).”

Rohit Sharma, vice-captain of India’s limited-over side, during one of his Instagram Live sessions, explained that he has very high regard for the youngster and considers him as the “future of Indian cricket”.

During a live session with Harbhajan Singh, Rohit said, “I think Shubman is a fluent batsman. He is a future of Indian cricket. Whenever he gets a consistent run, he will get confidence. He has a good domestic record. I think we should look to bring him into the side. There is a lot of competition in the side.” 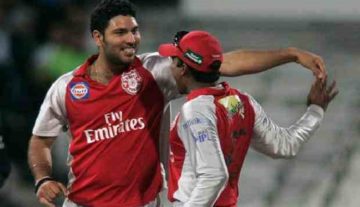 News
By CricShots - May 13, 2020
Yuvraj Singh Was Unhappy As The KXIP Skipper In IPL