Ireland and India locked horns with each other on Wednesday at the Malahide Cricket Ground in Dublin for the first T20I and the hosts lost by 76 runs. On the park, apart from Team India, there was one more player whose place of origin is India, Simranjeet Singh aka Simi Singh, the Irish all-rounder. Despite the fact that he wasn’t that much impactful in the game, either with bat or ball, but there’s much to him than mere cricket.

Born in Punjab, Simi has played alongside the players like Siddarth Kaul, who plays for Punjab as well. He played for Punjab U15, U17 and U19, however, couldn’t find a permanent spot in the team. He got frustrated after a point and embarked to Ireland in 2005 to pursue hotel management. Gaurav, one of his friends, told him about the opportunities of playing cricket and simultaneously continuing his studies in the European nation.

Once Simi started playing for the Malahide Cricket Club as an off-spinner after seeing videos of the legendary Saqlain Mushtaq. It was only in 2017 that he was blessed with an Irish citizenship. Meanwhile, the moments of the PCA Stadium in Mohali hasn’t faded away from his memories and he looking forward to playing at the venue. He is even planning to appear for the trials of the Kings XI Punjab (KXIP).

Yesterday, ahead of the match, Singh revealed how many emotions ran through him. He also drew comparisons between the Indian and Irish cricket. He said, “It is one heck of a journey. To be part of the Irish national team is a dream come true for me. The system in Ireland is very transparent unlike India; and today, if I find myself in the limelight, it is purely because of cricketing reasons.”

As quoted in Criccbuzz, Simi further added, “It was a very frustrating time for me and also my family. My dream to play for India was nipped in the bud. I would play cricket on the weekend by paying five euros per game. I worked at a grocery store so that I could afford to pay to play cricket.”

Bharti Vij, Simi’s coach, and one Punjab’s cricketing legends also praised the cricketer and reckoned that luck didn’t favor the youngster during his stint with Punjab. He said, “He was very hardworking, he was treated very badly here (in Punjab). Simi didn’t get the chance to prove his mettle at the U-19 level.” 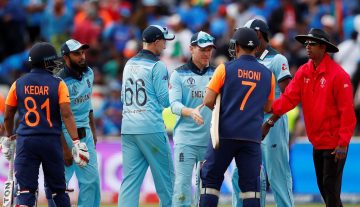 News
By CricShots - May 29, 2020
Holding Criticises Stokes For Questioning India’s Intent In WC