Mandhana had surpassed her previous highest score by some distance on Wednesday. Smriti along with Harmanpreet Kaur build a strong partnership of 134 runs for the third wicket.

The southpaw batter also went past her previous best score of 106 that she had scored against West Indies in 2017 Women’s World Cup. She added 135 runs in her brilliant innings with help of 14 fours and a minimum. Along with Harmanpreet, Mandhana broke the record of the highest partnership for any wicket for India against South Africa in South Africa (the previous record was 129) as they made 134 runs for the third wicket.

Team India went on to make as many as 302 runs in the first innings by losing just 3 wickets. They a gave a mammoth target of 303 runs with the help of Smriti Mandhana’s century to the hosts in the second innings. 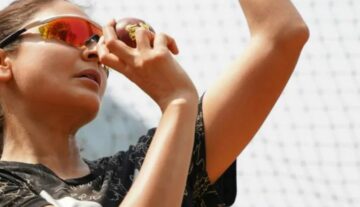 News
By CricShots - Aug 5, 2022
Anushka Sharma To Start Her Cricket Training For Chakla Express In UK