India had a poor start in the first warm-up game prior to the ICC World Cup 2019 at the Kennington Oval, London on Saturday, May 25 as they lost the game to New Zealand. Having considered as one of the favourites in the mega event, India lost their 7 wickets within 91 runs before a steady fifty from Ravindra Jadeja helped them to post 179. On the other hand, India’s concern for the No.4 spot remains constant. KL Rahul has given the chance today but he failed to impress, scoring 6 off 10.

Along with this, India’s bowling was not upto the mark as well. Though this pace attack is considered as the best in the World Cup over the years. All three pacers were featured in the recently concluded Indian Premier League (IPL) where Jaspreet Bumrah was in a great form other than Mohammed Shami and Bhuvneshwar Kumar. However, Shami was economical for India in their last series. But it would be a challenge for both of them in the seaming conditions in England. However, former India captain Sourav Ganguly shared that he would choose Shami in this condition alongside Bumrah because of his recent form.

Read here: Allan Border chose Kohli, Morgan and Finch as the three captains to watch out for

“I’ll play Mohammad Shami. He has not only been good in the IPL but has been brilliant throughout the year for India. Bhuvneshwar Kumar has had a dip in form over the last 4-5 months. I’m a fan of Bhuvi but it’s all about temperament and attitude. I believe he will come back stronger,”  Ganguly said to ‘Cricket Ki Baat’.

Ganguly even picked up Hardil Pandya as the third seamer in the team alongside Bumrah and Shami for the initial stage of the big event.

“I’ll want, at least in the initial stage of the tournament, to have Jasprit Bumrah, Mohammad Shami and Hardik Pandya in the pace attack,” said Ganguly. “I talked to Zaheer Khan during the IPL, and he insisted that he hadn’t seen an Indian bowler performing like that in years, which makes Shami even more important. His death bowling has improved, especially the yorkers. Bumrah and Shami will be the key during the death overs,” he further added. 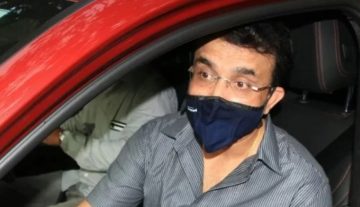