BCCI president, Sourav Ganguly has opined that the young wicket-keeper, Rishabh Pant should not be compared with MS Dhoni in the current scenario, as the Chennai Super Kings (CSK) skipper has way more experience as compared to that Pant due to his illustrious career. Ganguly has also backed Rohit Sharma to regain his form soon when he returns to national colors.

Rishabh Pant has often been compared with MS Dhoni for their familiar free-flowing ball-hitting ability. Pant has also been captaining Delhi Capitals (DC) in the last couple of seasons of the Indian Premier League (IPL), which has strengthened the debate even more. Dhoni, CSK had an illustrious career as the Indian skipper and has also led the Yellow Army to win four IPL titles.

Meanwhile, Rishabh Pant made a few errors as captain during their final game against Mumbai Indians (MI), which cost the Capitals ruled out of the tournament. He did not take a DRS when there was a clear spike off Tim David’s bat and missed an easy catch as well.

Speaking to PTI, the BCCI President Sourav Ganguly was inquired if Rishabh Pant is ready to fill Dhoni’s boots. Ganguly declined to come up with a positive opinion and said it would be unfair on Pant for being compared with Dhoni already.

As per the quotes in PTI, Sourav Ganguly said, “Don’t compare Pant with MS Dhoni. Dhoni has so much experience. He has captained in 500-plus games in IPL, Tests and ODIs. So it’s not fair for Rishabh to be compared with Dhoni.” 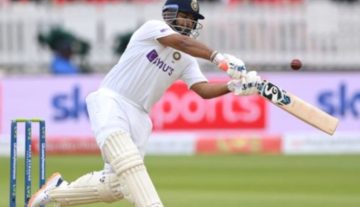