All sports governing bodies and cricket associations are suffering a major loss do the pandemic spread of COVID-19. With no matches played and all games canned, Sports authorities have no source of revenue. IPL is one of BCCI’s biggest revenue sources. So IPL’s cancellation will have a major financial impact on BCCI and people involved with it.

Due to the pandemic spread of the CoronaVirus, The future of the 2  biggest cricketing events if the calendar is uncertain. The franchised based IPL and ICC Men’s T-20 World Cup. While BCCI has already postponed IPL for an indefinite period, The future of ICC T-20 World Cup is bleak.

Ganguly mentioned that any decision on pay cuts will be taken after examining the financial stability of BCCI. Ganguly said, “We will have to examine our financial situation, see how much money we have, and take a call. Not hosting the Indian Premier League (IPL) will cause losses to the tune of Rs 4,000 crore which is huge. If the IPL takes place, we won’t have to go in for pay cuts. We’ll manage things.”

Ganguly also spoke on the floating reports suggesting BCCI will extend their tour of Australia. The Indian cricket team is slated to visit the land down under during later this year for the Border-Gavaskar series. Ganguly reckons it unlikely that BCCI will add more game to the 4 test match series. He says, “I don’t think it will be possible for India to participate in five Tests. There will be limited-overs games and plus we have to consider the 14-day quarantine guidelines. All this will extend the tour.”

Ganguly admits that the players’ excitement will be reduced if they play behind closed doors. He feel thae player will not be very excited to play without any fans in the stands . “Yes, the attraction will be less. I remember playing in such a scenario at the Asian Test Championship game against Pakistan in 1999 and there was a clear lack of excitement,” Ganguly recalled. 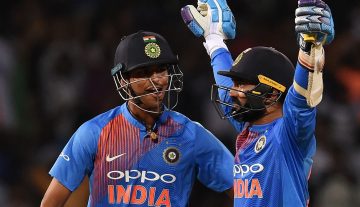