The turmoil surrounding South African cricket seems to be an everlasting one and there are certain chances that the Proteas are well on the verge of being banned from international cricket after it reportedly went ahead to intervene in the affairs of the sport’s national body after the recent revelations revarding the misconduct by senior officials.

South Africa sports minister Nathi Mthethwa has informed the global governing council of the action. However, the giverning coucil has informed that government can’t interfere much in the matter and punishment is normally a ban from international matches for the country’s teams until the national cricket body starts operating independently again.

The global governing council confirmed that it has been notified about the intervention. The member nation has been advised by the governing council to find a solution directly with a consultaion of their governments. The council mentioned that they will keep an eye on the development of the matter.

Informing the same, South African cricket body said, “Members are encouraged to resolve matters directly with their governments. We will continue to monitor the situation.”

Earlier in September, the South Africa government took control of the cricket board and decided to call the shots reagarding cricket in the nation. The move came as a major jolt after several members of the cricket board had alleged of  msome intense corruption charges.

ALSO READ: Umpire Didn’t Call A Wide After the agitation From MS Dhoni

However, the cricketing body has remained adamant and disagreed with their national Olympic body on removing key officials and the board. The board has instead taken the legal route and ask for legal advice from the lawyers. However, there is no clarification that if the step taken falls out of ICC’s rules on interference. It could also mean that the South African team will be banned from international cricket. 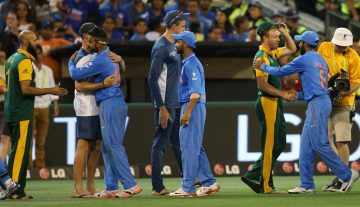