Rajasthan Royals have announced  Steve Smith as their captain for the upcoming season of IPL. However, former Australia captain is looking forward to playing with his Ashes rivals Ben Stokes, Jos Buttler and Jofra Archer in the IPL. Smith returned to International cricket earlier this year after the completion of one year ban and his battle with England speedster Archer made the headlines where he missed a Test due to concussion, after getting hit by a bouncer from Archer. However, he finished the Ashes with a whopping 774 runs at 110.57 which included three centuries and three half-centuries.

“It’s an honour to be named the Rajasthan Royals captain for the 2020 season,” Steve Smith told RR’s official website. “It’s been a pleasure leading the Royals in previous years and I can’t wait to play alongside this extremely talented squad, plus those we pick up in the auction!”

Recalling his battle against England players, Smith said it as “some of the toughest cricket” he has played. “After a summer of some of the toughest cricket I can remember against the England boys in the World Cup and the Ashes I’m looking forward to having three of them on my team this time around,” he said. “Everyone knows that Ben, Jos and Jofra are three of the finest cricketers in the world so it is going to be a fantastic tournament teaming up with them.”

On Friday, the inaugural IPL winners have announced that they have retained 11 players and released as many players before the 13th edition of the IPL. Top-ranked Test- batsman in the world, Steve Smith will lead the side under the guidance of newly appointed Head Coach, Andrew McDonald. 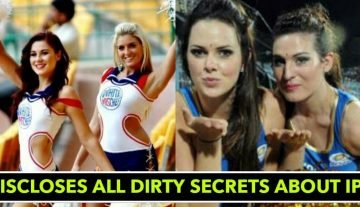 Article
By CricShots - Apr 25, 2017
Dirty secrets of IPL revealed by a cheerleader