Former Australian World Cup-winning captains Steve Waugh and Ricky Ponting both feel that the Australian team should drop the opener Aaron Finch in the final Test of the four-match home Test series against Australia.

At the end of the third Test of the series, Australia is trailing the series by 2-1. The fourth Test will be played at Sydney from 3 January 2019. As the Australian batting is struggling against the Indian bowlers and the opener Aaron Finch has mostly disappointed in this Test series, the former Australian World Cup-winning skippers feel that Finch should be dropped from the playing XI.

Also read: Justin Langer: The Difference In The Series Is Pujara And Kohli

While the Sydney track has historically supported the spinners and the leg-spin all-rounder Marnus Labuschagne has been added in the Test squad. Both the former skippers feel that Marnus will feature in the upcoming Sydney Test.

Talking about his Australian playing XI for the Sydney Test, Ponting told cricket.com.au, “I’ve seen Labuschagne has come into the line-up so to me straightaway that means Finch has to miss out and Usman will open the batting, I’d imagine.

“That’s how it looks Labuschagne probably bats four, Head five and Mitch Marsh six I think that’s the way they’re going to line up. I can’t really think what else they can do. The selectors and the captain and coach have obviously had a long chat about what they want and what they expect. We’ll see how they line up.” 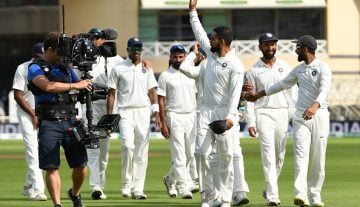 News
By Sandy - Nov 16, 2018
Ahead of Australia tour, Virat Kohli speaks about his major focus