Social Shots
Stuart Broad Got Injured Because Of James Anderson Ahead Of Lord’s Test
By CricShots - Aug 12, 2021 2:16 pm
Views 58

The veteran English fast bowler, Stuart Broad said he is gutted to miss the remaining matches of the 5-match Test series against India. Broad was ruled out of the series after suffering a calf injury during a training session ahead of the 2nd Test, scheduled to be commencing on August 12 at Lord’s in London.

Stuart Broad recently revealed the details of how he suffered he suffered the calf injury and highlighted how an innocuous training session has resulted in him missing four Test matches. Broad also joked that he had suspected his goof friend and fellow fast bower, James Anderson of whipping him with a rope during the training session when he felt a sudden pain in his calf muscle.

Captioning a picture on Instagram, Stuart Broad wrote: “Things can change so quickly. A moment before training all smiles then during the warm up, I jumped a hurdle, landed a bit awkwardly on my right ankle then the next step felt like I’d been whipped by a rope as hard as you can imagine on the back of my leg. I actually turned to @jimmya9 & asked why he whipped me! but when I realised he was no where near me I knew I was in trouble.”

Broad said he is not going to rush his recovery as now he will be focusing on the Ashes, which will be held in Australia in December-January.

Describing the same, Stuart Broad added, “Scans say grade 3 calf. All so innocuous. Season over & gutted to miss this India Test Series but a huge focus on Australia now. Going to take my time, no rush, baby steps & be the fittest I can be heading out there. Big focus in my brain.”

England are in danger of missing out on both Broad and Anderson ahead of the Lord’s Test and it’ll be happening for the first time since 2012 as the latter was reported to have some stiffness in his quad muscle during training on the eve of the Lord’s Test. Mark Wood is likely to replace Stuart Broad while Saqib Mahmood has also been added to the squad and he can replace Anderson.

ALSO READ: Dinesh Karthik Points Out The Changes In Rohit Sharma Since Marriage

On the other hand, India will be missing the services of all-rounder Shardul Thakur due to a hamstring niggle. It remains to be seen if India will continue as R Ashwin will be expected to replace Thakur. The senior off-spinner wasn’t featuring in the Nottingham Test which ended in a draw after multiple rain interruptions last week. 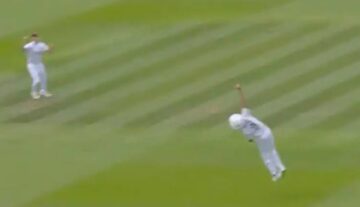