England’s premier fast bowler Stuart Broad made his debut 12 years ago, and now he has come a long way for his team. His new-ball partnership with James Anderson has driven England’s attack in Test cricketer. He is one of the crucial reasons that Anderson has been able to become the first England bowler to reach 400 Test wickets.

Ahead of this summer’s Test Series against India, English players and coaches have identified a major threat. One that has certainly made waste of England once before. Indian batsman Virat Kohli scored a whopping 655 runs across India’s 4-0 demolition of England last season, averaging 109 per Test.

In 2018, Kohli looks as threatening as ever, reaching the 40-run mark out of six during the white-ball games. However, Broad is determined England can replicate the 2014 series, where the side won 3-1 and reduced Kohli’s average to just 13 from five Tests.

As quoted in “The Mail”, Stuart said, “We’ll look at footage from 2014, when we really limited the number of runs he got. He’s improved a lot as a player since then and learned a lot from that series. He’s since got runs in Australia and South Africa, and scored a lot against us in India. You’ve got to stay away from his pads early which sounds ridiculous, but it is like Jonathan Trott. People said to go to his pads early, then suddenly he had hit 20 balls and he’s in. I will probably lean away from him being an lbw candidate early because that gets him going and once he gets in his conversion-rate is fantastic.”

With the weather in England is currently dry and hot, Indian leggies Kuldeep Yadav will be the crucial factor between the two teams. However, Broad feels differently, he said, “They’ll have got used to his variations and his pace. They will know what areas they will look to score off, and they should be more comfortable playing his mystery spin. From a selfish Test-match side of it, the batsmen have had a really good look at a spinner who could be very dangerous in the conditions we’re likely to play in.” 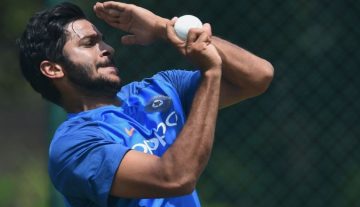