The Indian skipper Virat Kohli made another memorable comeback as he made an expected century on home soil, against the Windies on Day 2 of the Rajkot Test. There were some scintillating performances from his teammates, namely debutant Prithvi Shaw and all-rounder Ravindra Jadeja, both of whom brought up their maiden Test centuries. However, the young gloveman Rishabh Pant blasted his way to 92 but missed out on a second consecutive century. Even the local boy Cheteshwar Pujara was also amongst the runs as he contributed 86 to India’s mammoth first innings total of 649.

Kohli didn’t take much time to complete his 24th Test century on Day 2 that made him the second fastest player to those many centuries in the format. Shortly after his remarkable feat, former Indian cricketer Sunil Gavaskar made a bold prediction about the Indian skipper. Unlike Shaw and Pant, who showed urgency in scoring their runs, Virat’s century came in a calm and collected manner.

Virat scored 139 in 230 deliveries with the help of 10 boundaries. With this 24th ton in his 123rd Test appearance for India, Virat became the fastest Indian to achieve the feat, overhauling greats Sachin Tendulkar and Sunil Gavaskar. To add to his achievements, the captain also completed 1000 Test runs in 2018, thus achieving the feat for three consecutive years now.

Clearly impressed with the way Kohli batted, Gavaskar said, “Virat Kohli is the best batsman across formats in the modern era. He is by far the best batsman in the world. The way he applies himself is hard to describe. It is beyond the phenomenon. If only the West Indies batsmen took a leaf out of his book.”

As quoted in India Today, he further added, “On Thursday, he was not very smooth to start off with perhaps because he was coming back after a break. Then he was in cruise control. Despite the heat, he ran hard not just for himself but also for his batting partner at the other end.”

However, the former India skipper was very critical of the Windies Team. He said that the best of West Indian sides he had seen from the past, but in those days the Indian team used to be beaten inside three days. Their batting approach was a little hard to understand. 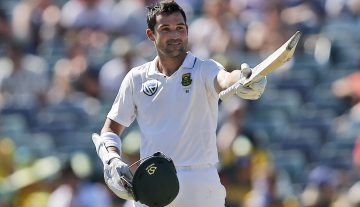 Article
By CricShots - Jan 17, 2018
Dean Elgar Points Out the Crucial Point Of The Centurion Test