Legendary Indian cricketer, Sunil Gavaskar has grabbed the attention of Indian cricket fans with his latest Instagram post. He took it to his official handle to share a picture with his former teammates from the World Cup 1983. He was seen spending a gala time alongside Kapil Dev and Mohinder Amarnath in the picture.

Gavaskar’s post fetched a lot of appreciation from his fans and followers got all nostalgic. They praised the trio who have made significant contributions to the growth of Indian cricket. Three of them seem to be enjoying each other’s company as they are seen all smiling in the picture shared by Gavaskar.

Sunil Gasvakar also added a fitting caption to the post as he wrote: “Cheers to ‘83 🏆.”

A biopic based on India’s triumph in World Cup 1983 is all set to hit the theatres on December 24, which will be starring Ranveer Singh and Deepika Padukone. The promotions are also going on in full flow for the movie named ’83’ as glimpses of the film were screened on the world-famous Burj Khalifa.

ALSO READ: Sachin Tendulkar Thanks A Traffic Cop For Saving His Friend

A few team members of the historic achievement in the 1983 World Cup were also present during the event. Sunil Gavaskar and Kapil Dev were two of the notable mentions as they relived the glory from 38 years ago unravel on the Burj Khalifa. Ranveer Singh shared the video of the same on his official Instagram handle while also reminding the fans of the release date of the movie ’83.

Under Kapil Dev, India won their first-ever World Cup in 1983 and the skipper led the team from the front as he finished as the highest run-getter of the team. as he has amassed 303 runs from eight games in the mega event. He was impressed with the ball as well wherein he scalped 12 wickets in that edition of the World Cup.

ALSO READ: Rohit Sharma talks to India’s U19 team at the NCA

In the summit clash of the marquee event, the Indian team registered a win over the defending champions West Indies at the iconic Lord’s Cricket Ground in London. After having put to bat first, the Kapil Dev-led side managed to post the target of 183 for the opposition. India then managed to restrict the Clive Lloyd-led team to just 140. 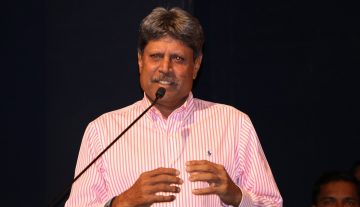