Former India player Sunil Gavaskar is considered one of the best players in world cricket. Recently, during a show, he spoke about the fastest bowler he faced during his time as well. Remembering the most fired-up spell he had ever faced, the batting legend revealed it was from a Test Match in Sydney between India and Australia.

Gavaskar was playing with the fellow opener Chetan Chauhan who had a verbal spat with Australia’s fast bowler Jeff Thompson. And, he started bowling at lightning speed. And, Sunil Gavaskar has recalled that he misread a conversation between them as well.

“Man, he was something. He was not happy about bowling at that stage,” Gavaskar recalled. “So he played that shot off Tommo and it went off the top edge, one bounce into the boundary for four.”

However, it was then when the Indian players started teasing Chetan Chauhan, who while laughing ended up making eye contact with the veteran Aussie player, who thought that he was making fun of the pace bowler. This made the Australian pacer angry and he started to spit fire with the ball as well.

Meanwhile, Sunil Gavaskar, who was observing from the other end, understood that, “he (Thompson) went across and marked a cross on Chetan’s helmet. He said, I am going to hit you there and then see if you laugh.”

Gavaskar, meanwhile, had tried his best to convey to Chetan Chauhan to leave it but the batter at the striker’s end was in no mood to back off as well. “And after that, he was bowling like the wind. Everything was flying around there. Unbelievable. That was the fastest spell I have faced,” concluded Sunil Gavaskar. 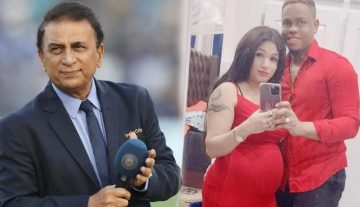 IPL 2022
By CricShots - May 21, 2022
Sunil Gavaskar Gets Trolled For His Comments On Shimron Hetmyer