Ravindra Jadeja pinned Glenn Maxwell in front of the stumps during the Gujarat Lions vs Kings XI Punjab encounter in Rajkot. Gujarat Lions’ captain, Suresh Raina, had won the toss and elected to field. The home team made the best possible start by dismissing Manan Vohra in the second over.

Kings XI Punjab then recovered via a 70-run partnership between Hashim Amla and Shaun Marsh. They had scored 88-2 by the halfway mark but with the additional loss of Marsh. It was in the 10th over when the captain, Glenn Maxwell, joined Amla in the middle.

Maxwell started his innings in his typical way. He was aggressive in his approach and was looking set to take on the opposition bowlers. But one trick which did not work for him was his trademark ‘switch hit’.

In what his maiden IPL wicket, Shubham Agarwal dismissed Amla. With six more overs to go, Maxwell was expected to play a more mature role in terms of batting till the end. But Ravindra Jadeja had other plans. On the second delivery of the following over, Maxwell attempted another switch hit. Failing to connect any part of the bat with the ball, the ball struck him in front of the stumps. Maxwell, too, had to walk back to the pavilion.

Some said that he should have waited for a couple of overs to play such a shot. But waiting is not really Maxwell’s forte. He went for the expensive shot, failed and paid the price for the same. Watch the video of his dismissal: 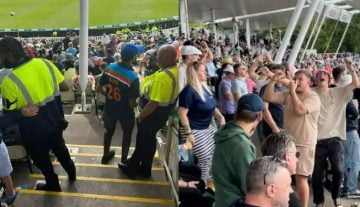