On this day in 2014, Sri Lanka defeated India in what was one of the lowest scoring finals of the ICC T 20 World Cup. A match remembered for the fabulous death bowling by them Sri Lankan team with perfectly executed outside the off stump full-length deliveries. It was, however, a forgetful encounter for the Indian all-rounder Yuvraj Singh who had a torrid day with the bat at one of the biggest stages of world cricket. In what was his final T20 appearance, SL wicket-keeper Kumar Sangakkara sailed his team through to help them lift the ICC T20 World Cup trophy for the first time.

Playing at the Shere Bangla National Stadium in Dhaka the Lasith Malinga leads the Sri Lanka team elected to field first. Indian openers Rohit Sharma and Ajinkya Rahane started things off for MS Dhoni ‘s team. Batting on a tricky wicket against Sri Lanka’s pace attack was by no way an easy task for the Indian batsman.

Angelo Mathews got the better of Ajinkya Rahae quite early in the game. Dismissing Rahane in just the second over of the game, Sri Lanka established their authority and showed they were here to win. Rohit Sharma was also sent back to the hut by Rangana Herath. The Mumbaikar duo could only manage 3 and 29 runs respectively.

The Indian fans will remember the match for Yuvraj’s painstaking struggle on the pitch.  Given a chance to bat above India’s captain MS Dhoni and middle-order Batsman Suresh Raina, Yuvraj chocked and wasted a lot of balls. Yuvraj’s inability to connect the ball. proved costly as Malinga and Co, managed economical final four overs that helped Sri Lanka tighten the grip and restrict India to a low score.  Yuvraj’s struggle at the crease was ended by Nuwan Kulasekara as the 2011 world cup hero managed to score just 11 runs from 21 balls.

The only positive from India’s collective batting failure at Dhaka was Virat Kohli. Batting with positive intent, the current skipper of the India n cricket team managed to score a valiant 77 from the 58 balls he faced.  Kohli was fabulous for the India team in 2014 emerging as its highest run-getter in the tournament.  India finished with the lowest-ever World T20 final score ending up with 130 on the board in the 20 overs.

With just 130 on the board defending such a total is not a menial task. The MSD lead team went full throttle and kept tight as long as they could. Mohit Sharma had gotten rid of Kusal Perera very early in the game as India began stepped it u and planned to tighten the screws on the experienced Sri Lankan batsman.

Ravichandran Ashwin and Suresh Raina kept bowling economical spells which got the better of  Tillakaratne Dilshan. The star batsman was undone by Rashwin ball as he tried to break off the shackles. Dilshan managed an 18 ball 16  before returning back in the hut.

Mahela Jayawardene could only manage 24 runs in the same number of balls but those runs mattered more than his strike rate as he joined fellow teammate Sangakkara and maintained the required rate which helped SL match out the even contest in the middle overs of the game. Raina scalped Jaywardhane and Sri Lanka was at a crucial juncture of the game.

Nuwan Kulasekara walked in for them and started batting aggressively while Kumar Sangakkara held the fort and stopped the flow of wickets from one end. The wicketkeeper-batsman remained unbeaten on 52 to guide his team home. while Nuwan Kulasekara 23- off 14 helped Sri Lanka emerge victoriously. It was the best parting gift for Kumar Sangakkara and Mahela Jayawardene, who were playing in their final T20I game. 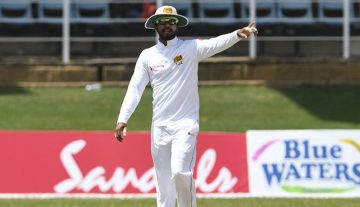