The fiery New Zealand batsman, Tim Seifert has tested positive for COVID-19 and failed to catch the charter flight with New Zealand’s other Indian Premier League (IPL) players, support staff, and commentators. Seifert, who was with the Kolkata Knight Riders (KKR) squad in the IPL 2021, failed both his pre-departure PCR tests and he was soon quarantine. Immediate advice is that he is experiencing moderate symptoms.

One of the two charter flights transporting players and support staff from New Zealand had already departed India, and the other will leave this evening (NZ time) after being delayed for logistical reasons. Once Seifert has undergone treatment and the statutory period of isolation and has tested negative for COVID-19, he will be transferred back to New Zealand where he will undergo the mandatory 14-day period of managed isolation.

ALSO READ: Deepak Chahar Reveals Their Was No panic In CSK Squad After Positive Cases

He is currently awaiting transfer to Chennai, and informing the same, NZC chief executive David White said. “It’s really unfortunate for Tim and we’ll do everything for him that we can from this end, and hopefully he will be able to test negative and be cleared and approved for discharge as soon as he’s well again. Since receiving the news, we’ve organized support for Tim and have also – via the players association.”

White said he was grateful to the BCCI and the IPL franchises for transporting the contingent through charter flights. There have also been changes to the arrangements for New Zealand’s UK-bound Test contingent, with Kane Williamson, Mitchell Santner, Kyle Jamieson, and physio Tommy Simsek, transferring to the Maldives (rather than staying in New Delhi) ahead of traveling to England.

While postponing the league on Tuesday, BCCI Secretary Jay Shah said the Indian board had no intention of compromising on the safety of those involved in the league.

Jay Shah had said, “The BCCI and the IPL GC have unanimously decided to postpone the 2021 season till further notice. We don’t wish to compromise the safety of the players, the people involved, the employees, the groundsmen, the match officials, every single person involved.” 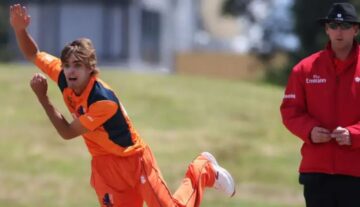