Former Australia cricketer Tom Moody has showered praises on the World No.1 T20I batter Suryakumar Yadav and his breathtaking batting. Moody compared the flamboyant batter with the Legendary West Indies cricketer, Sri Vivian Richards. Suryakumar, who made his debut for India in 2021, has risen to prominence in world cricket after consistent match-winning performances.

The Indian batter’s unique ability to smash boundaries in all parts of the field distinguishes him as a special talent in the shortest format of the game. He was appointed as India’s deputy skipper in the shortest format of the game against Sri Lanka, and he has retained the position for the team’s upcoming T20I match against New Zealand later this month. Suryakumar also received his first Test call-up for the upcoming series against Australia.

ALSO READ: Adam Zampa Disappointed After The Snub From The Test Squad

During the T20 World Cup, Suryakumar Yadav surpassed Mohammad Rizwan and Babar Azam to reach the numero uno position in the T20I batsmen’s rankings and is inching close to the highest individual ICC rating points in the history of T20I cricket.

During a recent chat with Sports Tak, Tom Moody said, “Suryakumar Yadav. Just the way he plays, it’s breathtaking. It reminds me so much of… when I was a young cricketer, watching the likes of Vivian Richards. The player who just seems to be in control of the game single-handedly.”

Suryakumar, who was the leading run-scorer in 2022 (1164 in 31 T20I innings), scored his maiden T20I century against England in Nottingham last July. He then scored his second ton with the unbeaten knock 111 off 51 deliveries during India’s limited-overs tour of New Zealand in November and hit his third T20I ton in the recently-concluded home series against Sri Lanka.

ALSO READ: Justin Langer Opines Australia’s Tour Of India Will Be The Hardest For The Visitors

Suryakumar is one of only five batters in the history of T20Is to have three or more centuries. Rohit Sharma has the most centuries with four, followed by Suryakumar, Glenn Maxwell (3), Colin Munro (3), and Sabawoon Davizi (3). (3). Suryakumar is also the only batter to have hit a T20I century in three different countries, joining Maxwell. 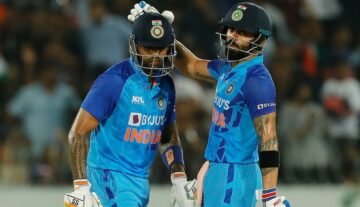