If there is one word that best describes India’s journey in the ICC U-19 Cricket World Cup 2018, it is ‘Dominating’. Unbeaten throughout the tournament, the Indian colts didn’t let Australia disturb their winning streak in the final. Man of the Match Manjot Kalra’s unbeaten century saw India winning the contest by 8 wickets.

With this U-19 world title in the kitty, India has become the first team to bag four ICC U-19 Cricket World Cup titles. Watch how the Twitterati reacted to India’s win:

Absolutely thrilled by the stupendous achievement of our young cricketers. Congratulations to them on winning the Under-19 World Cup. This triumph makes every Indian extremely proud.

Every Indian is delighted, all credit to Rahul Dravid for committing himself to these young kids ,and a legend like him deserves to lay his hands on the WC. Only Fitting. #INDvAUS

What a win for the U19 boys, take it as a stepping stone; Long long way to go! Enjoy the moment! 😊👏 @BCCI #U19CWC pic.twitter.com/D8mGdakxZu

WoW.. how good are these young Indians !!! At a different level and deserve all the successs #FutureStars #U19CWC Congratulations @BCCI Good job Rahul Dravid … well groomed !!

Pure dominance by India under 19 boys.Congrats to the boys n the support staff who worked towards the victory #ICCU19WorldCup

Kudos to U19 INDIAN TEAM 🇮🇳 for winning the WORLD CUP🏆 It has been a dream tournament for U guys. Enjoy this great moment. Take a bow Manjot Kalra for your match winning 💯. Thanks #Rahuldravid for making this talented bunch of boys the world Champions 👏👏 #U19WorldCup @BCCI pic.twitter.com/o7xtIoOUXj

Wow. What a proud moment for young India. Well done lil ones…May u keep conquering the world. And keep playing FIFA …on the side. A great morning. pic.twitter.com/2aLycIud95

Many congratulations to India 🇮🇳 u19 on winning the World Cup ! Great team effort no suprises at all on such a champion side #RahulDravid 👊🏽✌️

Congratulations to the entire unit for lifting the #U19WorldCup. Very dominant throughout the series.

Just one word to describe the approach of the #BoysInBlue in the historic final and all through the tournament – Mindfulness. Way to go boys! #WhistlePodu #U19CWC 💛🦁

Soaring high and how! What a win in the #U19CWC. Congratulations boys!

The young guns do a fine job as they clinch the 🏆after a clinical 8-wicket win. They've dominated throughout the series, and what a way to end it!
Karla's 💯 saves the day, only the second Indian to score a ton in a U-19 WC final. 👏 👏
Jai Hind 🇮🇳. #U19CWC#LiveOrange

All three while chasing and all three players are from DELHI. #U19CWC #AUSvIND

Congratulations India! Winners of the @ICC U19 Cricket World Cup 2018! Well done to all the teams, all the sponsors, and all the fans for a great World Cup! Crickets future is in strong hands! #U19CWC #FutureStars

Congratulations to the Indian team on dominating the #U19WorldCup and being the deserved champions. Everyone stood up and maintained the intensity throughout the tournament. Truly memorable win. Cherish and soak in this moment. #INDvAUS

Great work by the U-19 team to remain undefeated in the World Cup. Truly deserving winners. Your work has just begun, enjoy this moment!
A special shoutout to #RahulDravid who has continuously worked hard behind the scenes to help this team achieve its true potential. #ICCU19CWC

Congratulations to @bcci U19. Truly the best team in the tournament. 4th U19CWC title. A class above all else👏👏👏. So much talent all around this WC2018. Great pathway for the #futurestars. 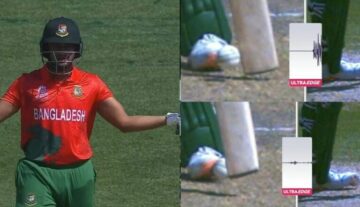